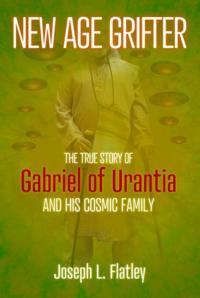 New Age Grifter: The True Story of Gabriel of Urantia and his Cosmic Family

New Age Grifter is the story of Gabriel of Urantia, a self-styled prophet living in a compound in the desert of southern Arizona with his 100 faithful followers. It's also the story of the American UFO craze of the 1950s, mind control, the U.S. Army's infiltration of the New Age movement, divorce, heartbreak, hearing voices, and what it takes to make it as a guru in modern America.

Gabriel of Urantia is the leader of a UFO religion based in the desert of southern Arizona. He has spent the last three decades weaving together his belief system, a tapestry of Eastern spirituality, Born Again Christianity, and New Age doggerel. In a compound near the Mexican border, his disciples tend the garden, take classes, and serve their guru while they wait for the end of the world. Joseph L. Flatley is a journalist who has spent years investigating Gabriel and his cult, the Global Community Communications Alliance. The result is New Age Grifter: The True Story of Gabriel of Urantia and his Cosmic Family. More than just another true crime book, it places Gabriel's religious community in the broader context of contemporary American belief.

Log in to get emails when Joseph L. Flatley has something new.