Home / Store / Books / Girls to the Front: The True Story of the Riot Grrrl Revolution 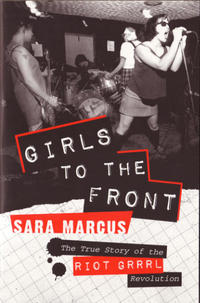 Girls to the Front: The True Story of the Riot Grrrl Revolution

The last great underground cultural movement of the pre-Internet age, Riot Grrrl revolutionized girlhood itself. In the early 1990s, young women were realizing that the equality they’d been promised was still elusive, and a newly resurgent right wing was turning feminism into the ultimate dirty word.

Riot Grrrl roared into the spotlight in 1991: an uncompromising movement of pissed-off girls with no patience for sexism and no intention of keeping quiet. They published zines, founded local groups, and organized national conventions, while fiercely prophetic punk bands such as Bratmobile, Heavens to Betsy, Huggy Bear, and Bikini Kill helped spread the word across the US and to Canada, Europe, and beyond.

Log in to get emails when Sara Marcus has something new.