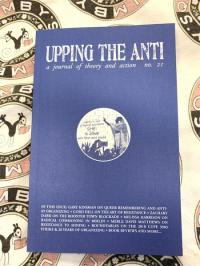 Upping The Anti #21 Journal of Theory and Action

Says the publisher: We publish theoretical and critical articles, interviews, and roundtables. Upping the Anti also includes a book review section where activists assess new writing on the Left. “Upping the Anti” refers to our interest in assessing the interwoven tendencies that deﬁne the politics of today’s radical left: anti-capitalism, anti-oppression, and anti-imperialism. Although inexact in their proclamations, these positions point toward a radical politics outside of the “party building” exercises of the sectarian left and the dead-end of social democracy. We are interested in stories that reﬂect these concerns. We publish pieces that actively engage with and intervene in contemporary movement debates. The journal is aimed at people who already deﬁne themselves as activists or revolutionaries. Our primary goal is to elaborate and clarify the political strengths and weaknesses of the contemporary politics of anti-capitalism, anti-oppression, and anti-imperialism. We avoid specialist language and academic jargon. We will not publish your school paper.

100 Years after the Winnipeg General Strike

Against the Mythologies of the 1969 Criminal Code Reform

An Interview with Gary Kinsman

The Politics of Art in Radical Anti-Fascist and Indigenous Movements, An Interview with Gord Hill

The Ground Beneath Our Feet

Commoning In, Against, and Beyond the Mechanisms of Urban Accumulation

“The Long Memory is the Most Radical Idea”

Reflections of Organizing from Anti-Globalization to the Climate Crisis

Building Power in the Fight Against the Corporate University

Organizing for Power in a Stolen City