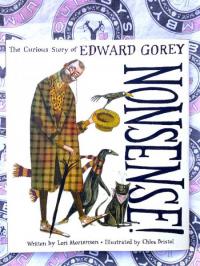 by Chloe Bristol and Lori Mortensen

A beautifully illustrated and lyrical picture-book biography of eccentric and beloved writer and artist Edward Gorey. In this lyrical biography of one of literature’s most creepily creative authors and illustrators, kids will learn about the inspiration behind a generation of creators, from Lemony Snicket to Tim Burton. Known for, among other things, wearing a large fur coat wherever he went, storyteller Edward Gorey was respected for both his brilliance and his eccentricity. As a child, he taught himself to read and skipped several grades before landing at Harvard (after a brief stint in the army). Then he built a name for himself as a popular book illustrator. After that, he went on to publish well over one hundred of his own books, stories that mingled sweetness and innocence, danger and darkness, all mixed with his own brand of silliness. Illustrated with Gorey-like humor and inspiration by Chloe Bristol, this stunning picture book biography about this beloved creator is the first for children. By Lori Mortensen and illustrated by Chloe Bristol.