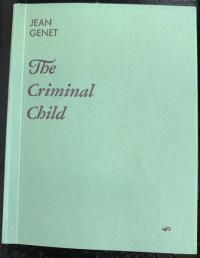 “As for me, I have chosen: I will be on the side of crime. And I will help the children, not to win back access to your houses, your factories, your schools, your laws, and sacraments, but to destroy them.” So reads this new clandestine translation of a previously censored and unavailable text by Jean Genet. “The Criminal Child” is a critical engagement with the French youth prisons, a reflection on Genet’s formative years within them, a document of hostility towards society and its benevolent reformers, and as argued by the anonymous afterword, an initiatory magical system. This text was censored, nearly forgotten, and has until now remained untranslated. It was forced into a sort of exile, and we have taken autonomous measures to bring it back, to will it into existence. This is not unlike the clandestine publication of Genet’s early novels: each initially smuggled from prison, published without imprint or publisher information, circulated illicitly and with much scandal. As a poet and also an enemy, Genet affirms the use and power of poetic weaponry. He speaks from the shadows and into the void. He stays at the edge of the night and writes only for those, beautiful, criminal, unrepentant, who can hear him.

Log in to get emails when Jean Genet has something new.