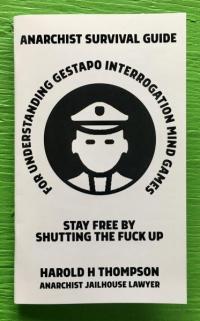 This succinct guide to withstanding police questioning is a must for anyone who's in danger of being targeted by the police, by virtue of race, class, disability, housing status, or political activity or affilliation. Learn what to expect during an arrest and interrogation, and how to stay out of prison, avoid falling for tricks, and how not to rat out your friends.

Harold H Thompson’s parents immigrated from Ireland to West Virginia in the early 20th century. Politicized at a young age in a coal mining town, Thompson was discharged from the Vietnam war after being wounded,  discovering anarchism. Returning to the U.S., Harold began a campaign of expropriating wealth and clashed with law enforcement. In 1978, Douglas Crawley killed the mother of Thompson’s oldest son. Crawley served as a police informant and was soon released from prison. Thompson found Crawley drinking in a bar and shot him dead. Imprisoned in 1979, Thompson served as a jailhouse lawyer, filing grievances, petitions, appeals, and lawsuits against prison officials whenever warranted. Thompson attempted escape in 1986 and was tried for attempted murder of three police officers. He died in West Tennessee State Penitentiary of a heart attack in 2008 at the age of 66. His anarchist friends scattered his ashes in Northern Ireland. A friend described Harold’s crimes as “no worse than the wage slavery that underpins our economy.”