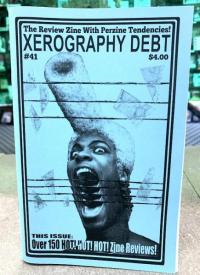 As per the publisher: The review zine with perzine tendencies! Since 1999, Davida Gypsy Breier's community-building zine formula in Xerography Debt might be best summarized as an obsession for all involved. Billy da Bling Bunny Roberts said "It's the glue that holds the zine community together." Xerography Debt is still the same ol' charming personality, allowing a hand-picked cast of contributors to wax philosophical about the zines they love. In an age of blogs and tweets, Xerography Debt is a beautiful, earnest anachronism, a publication that seems to come from a different era, but is firmly entrenched in the now.

Log in to get emails when Davida Gypsy Breier has something new.