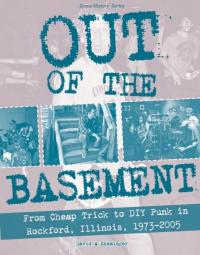 An evocative history of homegrown rock and punk music in one of the most blighted cities in America. Small town America built the punk rock revolution; but big city scenes have gotten all the coverage.No longer! Out of the Basement is a bracing, candid, democratic, and cutting edge portrayal of a rust belt city full of rebel kids making DIY music despite the odds. It combines oral history, brutally honest memoir, music history, and a sense of blunt poetics to capture the ethos of life in the 1970s-2000s, long before the Internet made punk accessible to small towners. From dusty used record stores and frenetic skating rinks to dank basements and sweat-piled gigs to the radical forebears like the local IWW chapter, the book follows the stories of rebels struggling to find spaces and a sense of community and their place in underground history. Includes hilarious untold stories and anecdotes about Fred Armisen, Green Day, and the Misfits.

Log in to get emails when David Ensminger has something new.