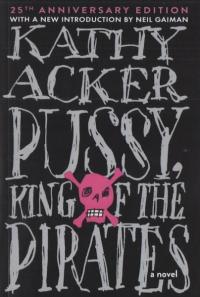 Loosely related to Robert Louis Stevenson’s classic Treasure Island, Pussy, King of the Pirates is a grrrl pirate story that journeys from the most famous whorehouse in Alexandria though an unidentified, crumbling city that may or may not be sometime in the future, to Brighton Town, England, and, finally, to a ship headed toward Pirate Island, where the stories converge and the vision ends. Neil Gaiman, a close friend of Acker's, has written a new introduction to this anniversary edition. In typical Acker fashion, he's including a text exchange with one of Acker's fictional heroines, Janey Smith, along with stories of their friendship and what Acker would think of everything now, today, “as the world begins to burn.”

Log in to get emails when Kathy Acker has something new.