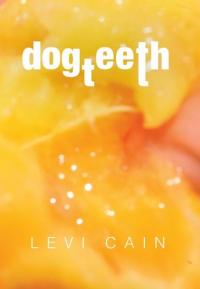 Levi Cain's DOGTEETH is a meditative awakening from the deeply integrated maxims of Catholic upbringing into a radical corpus of queerness, race, and gender identity. Cain's poems are a rectification of past harms and future lives made stable by the poet's own process of trauma. Cain's language is a pendulum of celebration and lamentation, and swinging between the two, a blade, to sever the past, to carve new meanings. DOGTEETH is a Mass for the oppressed, the marginalized, the forgotten, the broken, the subjugated; it is a room where Cain sloughs the skin of their old name and looks brightly upon their truth.

Log in to get emails when Levi Cain has something new.