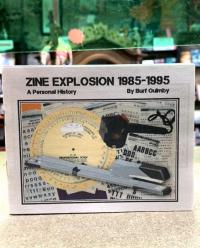 Burf Quimby, the esteemed founder of Quimby's, writes of his humble nerd beginnings as a Peanuts and Star Trek fan, to his journey into zine collecting and publishing. Some great zines name checked here, including Duplex Planet, Murder Can Be Fun, Factsheet Five and more. Burf overviews publishing Quimby Quarterly in Boston, founding the Small Press Alliance, and conducting Warhol Factory-like hijinks in Boston's Allston Mall, where he took over Primal Plunge (the proto-Quimby's founded by Michael McInnis, publisher of Nightmares of Reason). In the early 90s Burf moved to Chicago and opened Qvimby's Qveer Store. This zine is an excellent journey into the trangressive 80s to Riot Grrrl and a personal look into the rich legacy of zine history as it relates to his life. A gem, as is Burf, to whom we are forever indebted. -LM

Log in to get emails when Burf Quimby has something new.