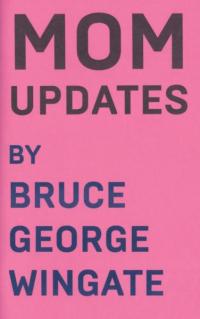 From HalfLetterPress.com: In 2017, after the passing of his father, musician and “minor 80s cult figure” Bruce George Wingate moved from Danbury, Connecticut to Central Florida to assist his 84-year-old mom. Not long after landing in The Sunshine State, Wingate began to post regular MOM UPDATES on Facebook detailing their conversations and life together. This booklet compiles a near complete collection of these status updates from the last few years.

Bruce George Wingate was one of the guitarists in the influential New Jersey hardcore band Adrenalin O.D. He has since played in The Brunch Mummies, New Reagans, The Earls of Sandwich, and Total Dick among other groups. His mom happily consented to the publication of these musings and exchanges and specifically chose Cherry as the optimal paper color for the cover. She is looking forward to sharing the booklet with her friends.

Note that due to Bruce's mom's love of crime stories, this booklet comes with a trigger warning for rape, gender violence, infant mortality, gun violence, vehicular manslaughter, and the macabre in general

This publication is preceded by five similarly-designed Public Collectors booklets that draw on texts from internet sources, featuring content that may soon disappear from view or has limited public access. Those publications are: GRAVE PLOTS (2019), SOLD AS BLANK / POSSIBLE LOST MEDIA (2019), STRETCH IS STILL SOFT (2018), 54 HITS FROM HELL by Blake Edwards (2018), and MATALICA TICKETS (2017).

Log in to get emails when Bruce George Wingate has something new.

It's Just Another Day #2

by Kelly Cree and Jessica Mullen