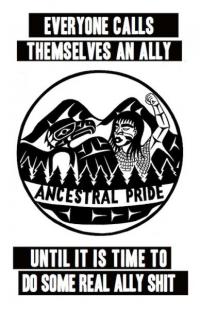 "Not everyone is a warrior. Not everyone wants to be in confrontational situations with the police and governments, or angry people, but most of the people who fall into this category are often pigeonholed as being a bull horn blow hard and march organizer. Creating a culture of resistance and support requires us all to know what our strong suits and talents are and to cultivate them so they benefit the cause in a manner that is respectful and meaningful." Xhopakelxhit, a member of Ancestral Pride, (some badass, grassroots, indigenous, direct action land defenders from unceded Ahousat territory) made this zine about how to be anti-racist/anti-capitalist white settler ally to people in all kinds of struggles -- indigenous and otherwise. Featuring artwork from Gord Hill and Annie Banks, it offers very concrete action ideas and resources that anyone can empower themselves with in the battle for restorative justice and building allies with settlers. 15% of the proceeds will go to supporting Ancestral Pride.

Log in to get emails when Xolpakelxhit has something new.