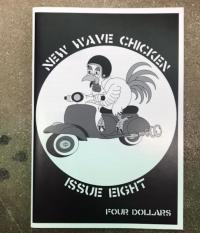 The author gives a history, via Fluke Publishing. "New Wave Chicken fanzine was created in an attempt to bring friends together and tell our stories of growing up in the early '80s, discovering punk rock and new wave, creating bands, seeing shows and surviving. For many of us, these formative years have galvanized us to the people we are today, creative and obsessive music fans. I remember sitting in my backyard in Maui, surrounded by chickens, thinking I should start writing stories down before I get too old, thus New Wave Chicken was born.

I’ve spent over thirty years creating issue number eight. It has been that long that I’ve wanted to interview Paul from Jim Jones and the Kool-Ade Kids and we spent days talking about how punk rock in West Michigan started, blossomed and exists to this day.

Another interview features Tim from the Cannibinoids, a popular West Michigan band that didn’t leave a record for us to remember, just a few pictures on the internet and a YouTube video.

Danbert Nobacon from the band Chumbawamba is also interviewed and we talk about his new musical project, Axis of Dissent.

The artist Mike Banks contributed a story about Grand Rapids, and another artist, Mike Fisher, who grew up in a small town in Northern California writes about discovering punk rock.

Lastly, I write about one of the most defining moments of my life, the days leading up to Mr. Bungle’s second North American tour.

I hope that you will be willing to join us in the celebration of punk rock, new wave and chickens.