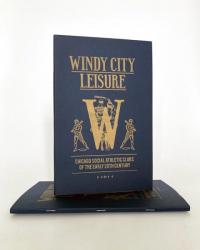 6"x9", 60p, letterpress by IS PRESS, printed by Smartpress, squareback, staple-bound, edition of 200

By the turn of the 20th century the structuring of labor in Chicago created a defined time for leisure between periods of work and rest. While many Chicagoans spent these hours gathering at taverns, sport increasingly became a past-time favored by the masses. Baseball grew to be especially popular across ethnic and economic lines. Local organizations known generally as "social athletic clubs" were founded to field teams. These neighborhood clubs were ubiquitous, often originating as informal street groups made official by decree of local politicians, with whom mutually beneficial relationships were established. On the forefront of local power structures, social affairs, and sporting culture, social athletic clubs made an impact on the lives of many in Chicago over the first half of the twentieth century. This publication, inspired by an original S.A.C. pamphlet printed in 1932, documents a selection of type-heavy dance tickets and photographs from clubs of this era while investigating facets of their histories, from the birth of baseball in Chicago to the 1919 race riots and roots of Chicago’s political machine.

by Brandon Johnson and Mario “Liv It Up” Luna

Log in to get emails when Brandon Johnson has something new.

It's Not What You Thought It Would Be