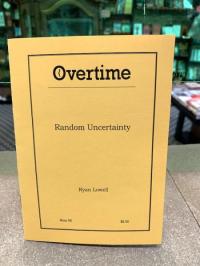 Clay, a twenty-something living in NYC and working as a data analyst at a trading corporation gets called in by HR for a random drug test. Normally, he would have been fine, but two days earlier, he'd been quite drunk at a party and smoked weed. He didn't even remember doing it until the drug testing paperwork is handed to him. "Random Uncertainty" follows Clay as he navigates the posibility of losing his job and the fallout that comes with it.

Ryan S. Lowell is a short story writer and novelist. His work has appeared in Workers Write! and Underwood Press online, and his story "Things Fall Apart" was a Glimmer Train short story award finalist in 2010. He lives in South Portland, Maine, with his wife and son and several rescue pets.

Log in to get emails when Ryan Lowell has something new.