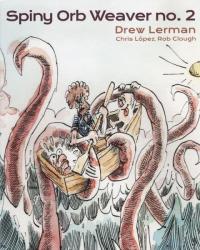 States of being on land, sea, and inbetween.

Spiny Orb Weaver is a comic arts journal, edited by Neil Brideau, that investigates the cartooning scene in South Florida! In each issue, a local cartoonist is commissioned to draw a new 12-page comic. Following the comic, Neil interviews the cartoonist. Back-pages are devoted to comics and essays by people who have lived in South Florida, but now live elsewhere.

Drew Lerman brings readers to the expansive world of his humor strip, Snake Creek in a new comic, “Head Trip!” Dav and his small friend, Roy decide to ameliorate the anguish of the enigmatic Head On A Stone, and their own anxieties, by taking him on boat ride into the ocean. A search for identity, the meeting of new friends, and puns upon puns ensue.

In his comic, “Beach Day,” Chris López recalls frequent childhood day trips to Miami Beach, and their influence on his lifelong connection to bodies of water.

Comics critic, Rob Clough rounds out the issue by recalling his childhood and the opportunities and challenges around the potential for a comics community to grow out of South Florida!