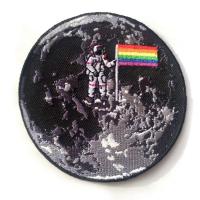 Sally Ride is the only known queer Astronaut to date. This information came to light in the obituary notice announcing her death in 2012. My exhibitions and performances create space and conversations around re-visioning exclusive and colonial American histories. A parallel DIY project to the Space Program itself.

Michelle Murphy (they/them) is a visual and performance artist based in Chicago, Illinois. Their work and research orbits around lesser-known sites and histories of the American Space Program.  Murphy earned a MFA from the School of the Art Institute of Chicago (SAIC) as a New Artist’s Society Fellow and a BFA from the Cleveland Institute of Art. Murphy has participated in several artist’s residencies including: Mana Contemporary Miami, SITELAB at the School of the Art Institute of Chicago, and Elsewhere (Greensboro, NC). Murphy’s interdisciplinary work has been exhibited in NYC, Paris, Switzerland, Guatemala City, Chicago, Miami, San Francisco, Albuquerque, Detroit, and Cleveland. Murphy co-curates the art and culture publication MAKE8ELIEVE with Swiss Artist + Designer named Cetusss. From 2013-2015 Murphy was Director and Founder of an Artist’s Residency Program and Gallery, Micro Art Space, in Cleveland Ohio which provided solo exhibitions, support, documentation, and mentorship for 18 Artists over 3 years. Murphy has lectured at SAIC, University of New Mexico, University of Chicago, Ithaca College, University of Utah, Loyola University, Cleveland Institute of Art, Cleveland State University, and Cuyahoga Community College.

Log in to get emails when Michelle M. Murphy has something new.