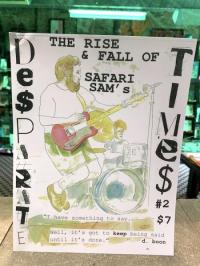 Desperate Times #2 The Rise and Fall of Safari Sam's

It's a story we all know well: Anykid in Anytown USA doesn't like what's happening in there, so they start a club. Call it Anyclub. But if you make it past the original growing pains -- the club wars, hit or miss bookings, spotty audiences -- the challenges are just beginning.

That's what happens in Huntington, CA, where Safari Sam's hosts the Jesus & Mary Chain's US concert debut in 1985, and rapidly becomes the epicenter of the Orange County punk scene (Adolescents, Social Distortion, Vandals), the SST stable (Black Flag, fireHOSE, Meat Puppets, Minutemen, Saccharine Trust), as well as plays, a spoken word open mic night that draws wall to wall crowds, and much, much more. For two glorious years (1984-86), anything and everything seems possible.

But it comes becomes clear that the city fathers have other plans for Sam's, that leave the club fighting for survival. What happens when the forces of bureaucracy and gentrification collide with a local DIY scene that springs up, like so many weeds in the sidewalk? This is a story of creativity versus capitalism, official culture versus unofficial culture, and every bit as relevant now as it was then.

It's an epic story, told in this cut 'n' paste, photocopied 'zine, featuring interviews with four of the principals, including co-founder and owner Fuhrer, plus musicians Jeff Beals and Dee Madden, and poet/writer Holly Day, in an oral history format -- with period clippings, flyers and photos (93 pp.).

Girl In the World (2nd edition)