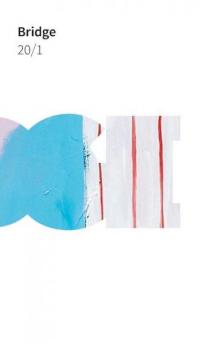 "The original goals of Bridge in the late 1990s emerged from the bedrock notion of interdisciplinarity, of a need to recognize interdependence of art across the disciplines, and to think and combine them where appropriate; we feel this concept has further evolved over the decades. The simple belief behind Bridge is that separate fields of inquiry can and should be thought of as having shared, intersectional horizons. Today, every existing worldview, whether scientific, philosophic, aesthetic, political, or literary must acknowledge its limits or risk being defined as obsolete, unachievable, and incoherent."

Bridge began in the early-aughts and published roughly 15 editions, with fiction, poetry, essays and more, publishing previously unreleased art, literature, interviews, poetry, news and essays from a diverse list of names such as Kurt Vonnegut, Aleksander Hemon, Wislawa Szymborska, Christo and Jeanne-Claude, Catherine Opie, David Cronenberg, and on and on. It won a Pushcart prize, published legions of firsts, and helped define new avant (and arriere) garde standards of art and art-making. Our goal is to publish a journal in the tradition of the vanguard printed volumes of previous eras -- from Tristan Tzara's Litterature magazine to Wyndham Lewis' Blast. What matters most is an uncompromising focus on the art and on art-making that doesn't split the difference with commerce, and of the humanist devotions of this position.