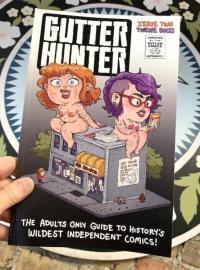 The Adults Only Guide To History's Wildest Independent Comics.

This new comic-sized, annually-published publication is a celebration of the weirdest, most memorable, rarest, and altogether most eyebrow-raising independent comics of all time. Small press, '90s alternative, '80s black & white explosion, '70s and '60s undergrounds - all of the most amazing non-corporate sequential art ever produced is on the table, and being rifled through.

Filled with reviews, comics, essays, interviews and while illustrated and hand-lettered, Gutter Hunter retains the aesthetic of the work it focuses on. Many of these are comics made by actual cults, outsiders, outlaws, and oddballs, and most of the stories here have NEVER BEEN TOLD BEFORE in any magazine.

"I have, for 25 years, been peering my investigative eye towards this very topic, but where it resides in the history of cult movies. In the book and magazine series of Cinema Sewer I've been uncovering and unearthing the behind-the-scenes dirt on the making of cult films, tracking down the people that made these cinematic marvels, and getting them to tell their stories. Now I'm turning that same eye, that very same writing style and focusing it on a road even less travelled: on the disrespected, underappreciated, and misunderstood history of indy comix." -Robin Bougie

Log in to get emails when Robin Bougie has something new.