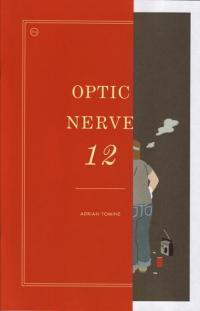 Two pitch-perfect stories of rejection, imperfection, and relationship drama, each ending on a surprisingly uplifting note. "Hortisculpture" pushes Tomine into a stylistic camp with Sammy Harkham, Jordan Crane, Chuck Forsman and Kevin Huizenga - perhaps more than ever before. The story works with a "Chalky White"-ish suburban everyman and his tempered ambitions, but camps up the visual style into a Marmaduke-y newspaper strip aesthetic. The effect is similar to the trickiness of his wedding planning comics. The second half is a repolishing of his "Amber Sweet" college girl mistaken for porn star plot. Plus we get a glimpse into Tomine's sad-sack mailbox, and some self-aware griping about putting out comics issue by issue.  -EF

Log in to get emails when Adrian Tomine has something new.