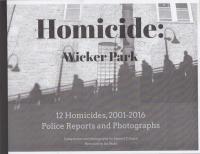 Sam Logan is a nurse who moved from Champaign to Chicago, and like most transplants, his art is born of an interest in his adopted city. That is, he pulled up the police blotters of 12 different homicides that happened between 2001 and 2016 that all happened mere blocks from Quimby's in our dear old Wicker Park and documented them in this zine with police reports, photos, transcriptions, and the most telling: current pictures of those spots now. And it's freaky. Like places I walk past on my break (Native Foods, formally a Burger King, for example) I now think "Shit, this is where a body with bullet holes lay behind a white Camero." I should also add the clinical nature of each police report adds a certain dry hilarity to these crimes of Liquor Park: "Witness #1 stated at that point offender #1 said, 'Fuck that shit,' and he proceeded to exit," never fails to slay me (no pun intended). There are at least 2 types of people (if not more) that I can think this zine is perfect for: people who spend a lot of time around here, and people who visit and say, "I'm visiting from out of town. Can you suggest an item a local interest item that would be a good souvenir?" Why yes, I can. -LM

Log in to get emails when Samuel T Logan has something new.