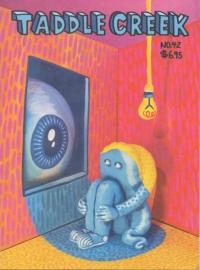 Canadian thingy containing a multitude of things between its snazzily illustrated covers, including, but not limited to, fiction, poetry, comics, art, interviews, and features stories. It’s an odd mix, to be sure, which is why Taddle Creek refers to itself somewhat oddly as a “general-interest literary magazine.” This issue: Fiction by BY ALEXANDRA LEGGAT,  ANN CHOI, RJ EDWARDS. Comics by REBECCA ROHER, IAN M., DAVE LAPP and more.