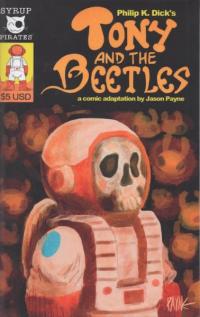 Tony and the Beetles tells the story of a young boy's final day on the planet he calls home. Originally published in 1953, this classic public-domain story by science fiction author Philip K. Dick (Man in the High Castle) has been adapted in to a comic by Jason Payne, who says in the introduction, "All of his [PKD's] personal themes of paranoia, suspicion, humanity, and the search for identity are present and accounted for...You'll find a reflection of our times."