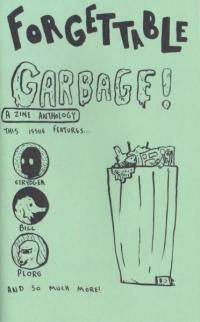 As per the back of the comic: "In his 2000 comics textbook Reinventing Comics, Scott McCloud said the next generation of cartoonists would either make revolutionary comics or forgettable comics or forgettable garbage. Hopefully this is both." Featuring comics by Finn Walker, Isabella Willis, Grant Marshal, Danny Cooper, Makhai Fahie, Chris Noon, Julia Lanotte and Noah Sherbin.