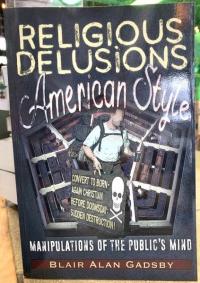 As per the publisher: "Americans would be shocked to understand just how their religious beliefs have been used against them in the political elites' efforts to engineer society and public policy. In this historical overview of key moments in American religious history, Gadsby demonstrates that what we are commonly-taught in our education systems, mass-media and the political world about religions' role in any number of events, is anything but. In the spirit of Lies My Teacher Told Me, Religious Delusions, American Style discusses eight areas in American history ranging from turn-of-the-nineteenth-century eugenics and the Scopes "Monkey" Trial, to the mind-control program known as Jonestown, to the implausible two-planes-three-buildings-straight-down operation called 9/11, we have been deceived in a big way about what has been done in the name of religion."

Log in to get emails when Blair Alan Gadsby has something new.