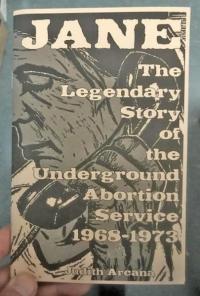 Jane: The Legendary Story of the Underground Abortion Service, 1968-1973

Before Roe v. Wade legalized abortion in the U.S. in 1973, the Abortion Counseling Services of Women’s Liberation was a group of over one hundred women in Chicago who each anonymously answered to “Jane.” When the group started in 1969, even providing information about abortion was a criminal act. Still, abortions were being sought and performed, and many women died as a result of the black market conditions of a procedure gone awry. Jane’s role was to refer women to honest, safe, and reliable doctors and to provide them with empowering information, options, and agency in their own healthcare. And later, to learn to perform these abortions themselves and teach women agency within their own healthcare.

Log in to get emails when Judith Arcana has something new.

Fuck Happiness: How Women Are Ditching the Cult of Positivity and Choosing Radical Joy