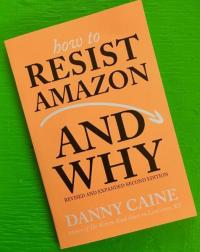 How to Resist Amazon: Revised and Expanded Second Edition

When a company's workers are literally dying on the job, when their business model relies on preying on local businesses and even their own companies, when their CEO is literally the richest person in the world while their workers make minimum wage with impossible quotas... wouldn't you want to resist? Danny Caine, owner of Raven Book Store in Lawrence, Kansas compiled this zine about his commitment to fighting the seemingly impossible giant in the bookselling world: Amazon. This zine includes the open letter he wrote to Jeff Bezos, examples of successful social media activism that produced waves of successful economic solidarity for local bookstores, links to other resources, and some sobering words about boycotting. Let this zine inspire you to support independents and stand up to the biggest threats facing our society!

Log in to get emails when Danny Caine has something new.