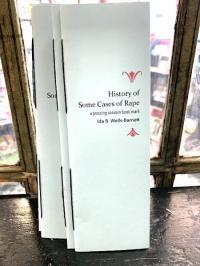 History of Some Cases of Rape: A Pressing Concern Book Mark

by Ida B. Wells-Barnett

The Red Record: Tabulated Statistics and Alleged Causes of Lynching in the United States, the 100-page pamphlet released in 1895 from which this essay is excerpted, was a follow-up to Wells-Barnett’s groundbreaking 1892 text, Southern Horrors: Lynch Law in All Its Phases. Both publications detail false rape allegations by white women and men used to justify lynchings, undertaken to forestall black economic progress. Wells-Barnett’s work is often interpreted as an indictment of white male protectionism; however, History of Some Cases of Rape, from chapter six of The Red Record, is a straightforward potrayal of white women’s complicity in the murder of black men. Indeed, Wells-Barnett goes far beyond depicting white women crying rape before running away: here, in fact, they are shown to commit acts of violence themselves.

Ida B. Wells-Barnett (b. 1862, d. 1931) was an educator, investigative journalist, and civil rights leader in Memphis, TN and Chicago, IL. She was awarded a Pulitzer Prize in 2020 for “her outstanding and courageous reporting on the horrific and vicious violence against African Americans during the era of lynching.”

Eat, Pray, Love: One Woman's Search for Everything Across Italy, India and Indonesia, Elizabeth Gilbert

A Good Man is Hard to Find, Flannery O'Connor

Log in to get emails when Ida B. Wells-Barnett has something new.