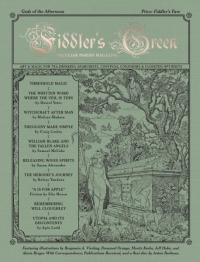 Fiddler's Green #7 Gods of the Afternoon

The seventh issue, also known as “Gods of the Afternoon,” published February 2020.

Fiddler’s Green 7 features copper titling, a cover drawn by Benjamin A. Vierling, and 52 pages of art and magic, including reviews, a letters column, and the following:

Et in Arcadia Ego, by Benjamin A. Vierling

Magic at the Doorstep: Better Dwelling on the Threshold, Editorial by Clint Marsh

The Written Word Where the Veil is Thin: Meaning and Misdirection on the Grimoire Path, by Daniel Yates, illustrated by Drowned Orange

Who Shall Inherit the Earth? Wilderness and Anti-Humanism in Witchcraft, by Melissa Madara, illustrated by Moritz Krebs

Theogony Made Simple: Tracing the Divine Branches of Your Family Tree, written and illustrated by Craig Conley

Descended Masters: William Blake and the Fallen Angels, by Samuel McCabe, with illustrations from William Blake

Releasing Wood Spirits: A Simple Question and a Life’s Work, written and illustrated by Susan Alexander

The Heroine’s Journey, by Kelsey Yandura, illustrated by Jeff Hoke

“A is for Apple,” fiction by Elin Heron, illustrated by Alexis Berger

Remembering Will Cloughley, by Clint Marsh

Utopia and Its Discontents, by Apio Ludd

“Rich with magic, wisdom, and joy.”

“Delightful…evocative of something one could imagine sitting alongside Jimmy Cauty’s Lord of the Rings poster, or the work of Hapshash and the Coloured Coat.”

“Exquisite…a wonderful publication bound to be thought of as a highlight in esoteric journal and zine publishing of the early 21st century.”

by Gerhard and Clint Marsh

by Clint Marsh and Timothy Renner

Log in to get emails when Clint Marsh has something new.