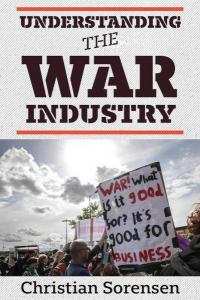 Stunning in its research and analytical perspective, Understanding the War Industry exposes how the war industry commands the other two sides of the military-industrial-congressional triangle, and is consuming the American economy in the process. This book lays bare the multiple levers enabling the vast and proliferating war industry to wield undue influence, exploiting financial and legal structures, while co-opting Congress and the media. Spiked with insights into how corporate boardrooms view the troops, overseas bases, and warzones, it assiduously documents how corporations profit by providing a myriad of goods and services to such sectors of war-making as design, production and servicing of advanced weaponry, drones and nukes; invasive information technology; space-based weapons; and special operations -- with contracts stuffed with ongoing and proliferating developmental, tertiary and maintenance products for all of it. It names the names -- individuals and corporations -- that weld it all together. War-related spending permeates the U.S. economy, masquerading as patriotism, national security and troop protection. No geographic or economic sector remains untouched. Even large swaths of U.S. academia succumb to the gravy train, diverted from the pursuit of knowledge that might otherwise benefit humanity. Foreign governments provide a major source of revenue for U.S. war corporations. Their sales generate a military buildup worldwide, turning state leaders into blatant arms pushers, and requiring global threat-mongering and outright war to justify the vast expense. Understanding the War Industry serves as both an authoritative textbook, and an unparalleled resource to galvanize public protest at the carnage and the waste that leaves ordinary Americans to face tanking social welfare indicators and deteriorating infrastructure. Its coverage of the ins and outs of corporate dominance and their built-in for-profit imperatives substantiates what many have long only suspected as the primary impetus for an often seemingly aberrant, incomprehensible American foreign policy. War corporations’ drive for profit drives America’s endless wars. No president, even if so inclined, can stop America’s permanent wars until and unless a mass movement comes to understand and then demand the roll back of corporate war profiteering, their deeply-rooted cause. This book provides a lever.

Log in to get emails when Christian Sorensen has something new.