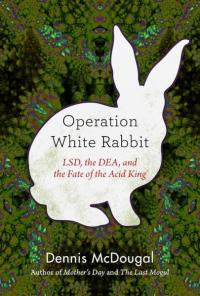 the Operation White Rabbit: LSD DEA, & the Fate of the Acid King

A search for the truth behind the DEA's life imprisonment of acid's most famous martyr. A narrative for fans of Michael Pollan's How to Change Your Mind, investigative journalist Dennis McDougal tells the "Acid King" William Leonard Pickard's personal story is set against a fascinating chronicle of the social history of psychedelic drugs from the 1950s on. Operation White Rabbit traces the rise and fall-and rise and fall again -- of the psychedelic community through Pickard's life. Pickard was a bonafide genius, a follower of Timothy Leary, a con artist, a womanizer, and a believer that LSD would save lives. He was a foreign diplomat, a Harvard fellow, and the biggest producer of LSD on the planet -- if you believe the DEA.

Log in to get emails when Dennis McDougal has something new.