Home / Store / Books / Echoes Of a Natural World: Tales of the Strange and Estranged 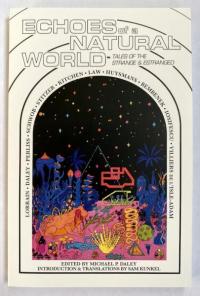 Echoes Of a Natural World: Tales of the Strange and Estranged

Echoes of a Natural World presents a continuum of discomforting reactions to a world perpetually out of whack. Nature, so oft considered the epitome of “order” and “tranquility” in the human mind, is herein explored at its most aberrant, absurd, and nightmarish. Through eleven weird tales, Echoes of a Natural World raises questions about Nature’s influence on the mind and the mind’s unnatural influence on Nature.

This kaleidoscopic collection wades in those nebulous waters where the inner world and outer landscape mesh. For as we barrel into a reality where technology has seemingly penetrated even the most remote corners of the earth, one must ask: Is it even possible to have a genuine interaction with Nature anymore? Has it ever been? Or have these longings always been the romantic delusions of a species obsessed with itself? Echoes of a Natural World defies easy categorization and easy answers.

The Bobby BlueJacket: The Tribe Joint, The Tulsa Underworld