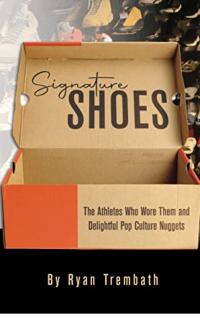 Just about everyone is familiar with the Nike Air Jordan shoe, but just when did the practice of attaching an athlete’s name to a shoe become common practice? This text takes you from the beginning of the signature shoe industry, and through the 1980s when the popularity of signature shoes accelerated. At the start of the ‘90s, just about every footwear company was producing a signature shoe, and looking for the next charismatic spokesperson, when they saw the dollars Nike was making with the Jordans. Eventually, signature shoes entered all facets of popular culture and were taken for granted by the public. Before long, it wasn’t just the most well-known and marketable athletes getting their own shoe. Athletes in Major League Baseball, the Women’s National Basketball Association, National Association for Stock Car Auto Racing, Formula One, the Professional Golfers’ Association, the National Football League, musicians, and even the National Hockey League had their own footwear to go along with the mainstays of the NBA and professional tennis circuits.

Log in to get emails when Ryan Trembath has something new.

by Quimby's Bookstore and Caroline Cash