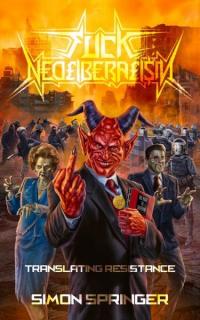 Fuck Neoliberalism: Translating Resistance is a worldwide middle finger to the all-encompassing ideology of our era.This book brings those translations together, accompanied with short essays from each translator that explain the reasons why they translated the text and describes the localized struggles against neoliberalism in their regions. With translations into languages from across the globe, this book highlights the international nature of resistance to the totalitarian ideology of neoliberalism. Featuring a cover produced by renowned artist Ed Repka (a.k.a. the King of Thrash Metal Art), this internationalized, heavy-metal rant against the all-powerful ideology highlights a chink in its armor. When people across the world find a way to communicate a shared message and stand together, resistance can be both beautiful and inspiring.

Log in to get emails when Simon Springer has something new.