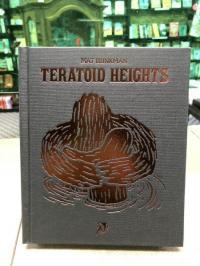 Teratoid Heights realistically depicts the lifecycles of various species found in the tide location’s cave-riddled terrain, down to the most painstakingly detailed behavioral patterns. It matters not that both Teratoid Heights and its inhabitants are entirely fictional. Brinkman taps into the zeitgeist of modern suburban America with what seems to be a mixture of J.R.R. Tolkein style adventure, video-game inspired syncopation and an endless barrage of cable-television nature films all filtered through the reddened eyes of a marijuana-addled teenager. A book that reveals levels of humor and humanity no matter what age the reader

Mat Brinkman lives and works in Colorado. In 1995 he co-founded Fort Thunder and the famed Paper Rodeo zine, that was active until 2001. Brinkman’s prolific output of posters, comics, music, and films continue to be highly influential. Many comic critics qualify him as the most influential underground comic artist of the past two decades.

Log in to get emails when Mat Brinkman has something new.