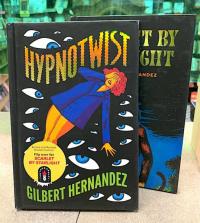 Collects (and expands!) the graphic novellas "Hypnotwist" and "Scarlet by Starlight" from Love and Rockets: New Stories in a handsome "Double Feature" package.

In the Eisner Award-winning wordless comic (silent movie?) "Hypnotwist," Hernandez's B-movie star Fritz plays a character who doesn't seem to be going anywhere, until she puts on a pair of glittery pumps. Her wanderings become increasingly surreal as she confronts motherhood, alcoholism, a sinister smiley face, cruelty, and her worst fate: "Killer" cameos! Includes 16 pages of previously unpublished, additional material. "Scarlet by Starlight" is a B movie that's Star Trek meets Heart of Darkness. "Scientists," or colonizers, are doing research, surrounded by "primitive" fauna they affectionately nickname or treat like pests. Fritz plays Scarlet, a peaceful, catlike humanoid with a mate and children. When she becomes infatuated with one of the scientists, the fragile web of relationships explodes into violence and death, calling into question who the "advanced, civilized" creatures really are.

The two graphic novellas that comprise the book will be published together with two covers, so the two stories each end in the middle of the book (with the one you're not reading being upside down). This very cool, handsome "Double Feature" package will be an essential item for Love and Rockets completists!

"Hernandez has become the medium's David Lynch or Guy Maddin, rolling his personal obsessions and freewheeling abstractions into stories that present as pulp, then take some very weird turns." -The A.V. Club

Log in to get emails when Gilbert Hernandez has something new.