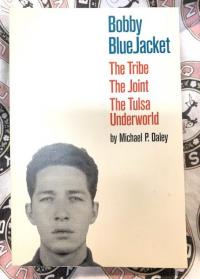 The Bobby BlueJacket: The Tribe Joint, The Tulsa Underworld

Bobby BlueJacket illuminates a neglected history of American crime, identity, and politics in the 20th century. This is the extraordinary true story of a man who went from career thief and convicted killer to celebrated prison journalist, ultimately becoming a respected Eastern Shawnee activist and orator. Bobby BlueJacket draws upon 5 years of interviews with the subject, long-buried law enforcement and trial records, prison archives, news accounts, and interviews with others such as photographer Larry Clark and veteran reporters of Tulsa's crime beat. Born in 1930, BlueJacket came of age as a Native American in white Oklahoma, passing through teenage rumbles, scheming pool halls, and Midwest safecracker crews. While incarcerated, he remade himself as a prison journalist. By the 1970s, he would act as a political impresario, used tire salesman, prison rodeo emcee, and later as a venerable tribal elder. At each turn, BlueJacket sought out success and self-definition by any means necessary. More than just an underworld tale, Bobby BlueJacket is an in-depth exploration of one man’s experience in a brutal post-war world.

*HEY! THIS DOESN'T FIT IN A REGULAR PACKAGE WE WOULD USE TO SEND SOMETHING OF THIS PRICE. YOUR SHIPPING MAY BE MORE THAN THE PRICE OUR WEBSITE CALCULATES AT CHECKOUT. IF THIS IS THE CASE WE WILL CONTACT YOU. THANKS!

Log in to get emails when Michael P. Daley has something new.