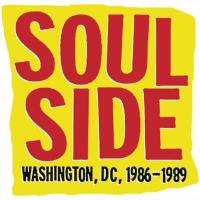 A photographic history of the DC-based 1980s punk rock band that recorded for Dischord Records.

Soulside, a band from the mid-1980s Dischord Records punk rock scene in Washington, DC, grew into maturity in a few short years, going from occasional club shows to nationwide tours and a full European tour in 1989 immediately preceding the fall of the Berlin Wall and the collapse of the Soviet Union. With songs influenced by the political and social leanings of the DC punk world of the eighties, Soulside worked with a worldwide underground network to tour throughout North America and Europe. The four-year span of the band would end with a recording session of their last album, Hot Bodi-Gram, in Eindhoven, Holland, at the conclusion of their final tour.

As a perennial photographer, graphic designer, and archivist, the band's drummer, Alexis Fleisig, has kept a collection of photos and flyers from these tours and has compiled as much as he could into this volume. The book is an ode to the people who made that journey possible, and a chronicle of the great eye-opening experiences those moments brought to the band and others.

Log in to get emails when Alexis Fleisig has something new.