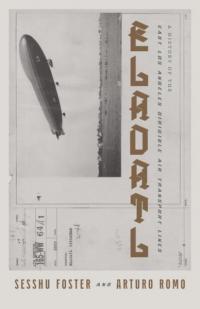 This absurdist novel detailing the history of a fictional utopian era in American Air travel, tells the story of the early years of the twentieth-century, the use of airships known as dirigibles was being promoted by a semi-secret movement, with the aim was to lift oppressed people out of racism and poverty. It's a breathtaking free fall into the long-buried (and fictional) history of a utopian era in American lighter-than-air travel, as told by its death-defying, aero-acrobatic heroes.

In the early years of the twentieth-century, the use of airships known as dirigibles, some as large as one thousand feet long, was being promulgated in Southern California by a semi-clandestine lighter-than-air movement. Groups like the East LA Balloon Club and the Bessie Coleman Aero Club were hard at work to revolutionize travel, with an aim to literally lift oppressed people out of racism and poverty.

ELADATL tells the story of this little-known period of American air travel in a series of overlapping narratives told by key figures, accompanied by a number of historic photographs and recently discovered artifacts, with appendices provided to fill in the missing links. The story of the rise and fall of this ill-fated airship movement investigates its long-buried history, replete with heroes, villains, and moments of astonishing derring-do and terrifying disaster.

Written and presented as an “actual history of a fictional company,” this surrealist, experimental novel is a tour de force of politicized fantastic fiction, a work of hybrid art-making distilled into a truly original literary form. Developed over a ten-year period of collaborations, community interventions, and staged performances, ELADATL is a furiously hilarious send-up of academic histories, mainstream narratives, and any traditional notions of the time-space continuum.