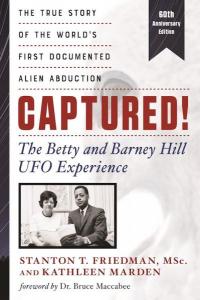 Today, 60 years after the UFO abduction of Betty and Barney Hill, more and more people are convinced that UFOs are real and their existence is being covered up by the government. If you have doubts or questions about the Hill case or alien experiences in general, Captured! will give you the answers you’re searching for. The 1961 abduction of the Hills stirred worldwide interest and enthralled the public and media for decades. The case is mentioned in almost all UFO abduction books. It also became a target for debunkers, who still attack it today. But the complete story of what really happened that day, its effect on the participants, and the findings of investigators has never been told, until now. In Captured! you’ll get an insider’s look at the alien abduction, previously unpublished information about the lives of the Hills before and after Barney’s death in 1969, their status as celebrities, Betty’s experiences as a UFO investigator, and other activities before her death in 2004. Kathleen Marden, Betty Hill’s niece, shares details from her discussions with Betty and from the evidence of the UFO abduction. She also looks at the Hills’ riveting hypnosis sessions about their time onboard the spacecraft. The results of a new chemical analysis of the dress Betty was abducted in is shared, which found unusual and rare elements on it Newly discovered letters at the American Philosophical Society by debunker Philip Klass, regarding an orchestrated plot to paint Betty as delusional reveal what early detractors tried to do. In addition, coauthor, physicist, and ufologist Stanton T. Friedman reviews and refutes the arguments of those who have attacked the Hill case, including the star map Betty Hill saw inside the craft and later recreated.