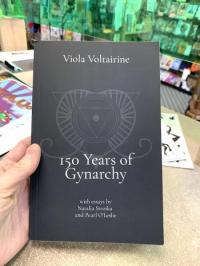 150 Years of Gynarchy: with essays by Natalia Stroika and Pearl O'Leslie

As per the authors: This book is for men who worship women. It's for women who think feminism doesn't go far enough. It's for people of all genders who are fed up with male dominance. The opposite of patriarchy is Gynarchy, but it's not just a simple flip of the script. The Gynarchist must not emulate the same mistakes, or perpetuate the oppressive power dynamics prevalent for thousands of years. This book offers a theoretical background and a simple set of ideas and dynamics for bringing about the downfall of male dominance and ending the brutalization of women. Liberation begins at home. This includes using sex and sexuality to shift the collective psyche. 150 Years of Gynarchy will deprogram misogyny, heal wounds, balance the scales of history, and lead to a real and lasting equality.

by Yolande Leong and EJ Oakley