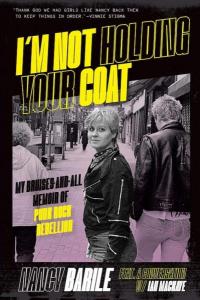 I’M NOT HOLDING YOUR COAT: My Bruises-and-All Memoir of Punk Rock Rebellion

“The old punk rock world was full of wanna-be contenders and straight up pretenders, and then there were those that you knew would rise above. Nancy was one of the latter -- she was there and solid and supportive, and over the years I’ve watched her take the grit of that old world and use it as a hammer to fashion this present place into a more livable space. I’m proud to say I know her.” -Jack Grisham, T.S.O.L.

“Her true life story is so similar to my own, where we re-live and discover in the rough decay of the 1970s city life, the color and the life of the underground gay and punk scenes; The struggle, sounds, smells and color come alive. I feel the tension as a woman navigating to find her voice.” -Cynthia Connolly, Banned in DC

“I have known Nancy for most of my life as a great friend and as a contributor and caregiver to all who know her socially or personally. I photographed several of the exact moments described in this book but never once witnessed a punk show in Philly, so I enjoyed Nancy’s insight.” -Glen E. Friedman, My Rules

“In this book, Nancy paints a gritty portrait of an underground music scene, captures a highly underrated but extremely vital part of rock ‘n’ roll, and accurately documents a very important time in my life.” -Dicky Barrett, The Mighty Mighty Bosstones

From disenchanted Catholic schoolgirl and glam maniac to instigator on the 1980s hardcore punk scene, Nancy Barile discovered freedom at a time when punk music was new and dangerous. She made her place behind the boards and right in the front row as insurgents such as SSD, Minor Threat, Bad Brains, Dead Kennedys and Black Flag wrote new rules and made history. She survived punk riots and urban decay, ran the streets with outcasts, and ultimately found true love as she fought for fairness and found her purpose.

Log in to get emails when Nancy Barile has something new.