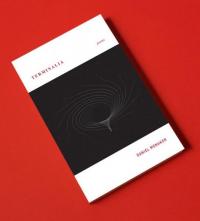 Published by The Portal Press

A collection of poems by author Daniel Menaker, published by The Portal Press.

In January, Daniel Menaker, former New Yorker fiction editor, Random House editor-in-chief, and author of The Treatment, among many other books, received a terminal diagnosis of pancreatic cancer, and the twenty-four poems collected in TERMINALIA were written over the course of Menaker’s diagnosis and treatment. The collection chronicles his “long contention with the truth”: that “The illness you’re fighting / And to which you will lose was Written, like this. / But uneditable, inevitable.”

Lauded by Janet Malcolm as “a true comic artist,” Menaker reflects on the long arc of an extraordinary life in verse that’s at once mournful and remarkably, even insistently funny. Writing from the “imaging slab,” “the argot of the docs and lab reports,” and the haze of painkillers, his poems playfully register the humorous and rhetorical possibilities latent in medical and anatomical terminology. Against the “sickness circus” of pandemic-era New York City, Menaker’s account of his private experience of illness stays attuned to both “joy and its twin brother, mourning.”

Log in to get emails when Daniel Menaker has something new.