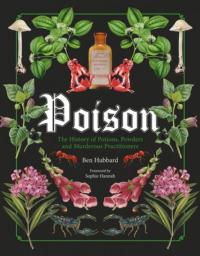 Poison: The History of Potions, Powders and Murderous Practitioners

Poison documents the tales of the users and victims of these mysterious substances. Profiles of the most commonly used toxins of each era reveal how poisoners have harnessed these natural killers to achieve their ends.

Poisoning is the dark art as old as human history itself.Chronologically recounting the story of history's silent assassin, Poison documents the gripping tales of the users and victims of these mysterious substances. From Cleopatra, the Borgias and Qin Shi Huang to contemporary secret service agents and terrorists. Profiles of the most commonly used toxins of each era reveal how the power-hungry, the dangerous and the desperate have harnessed these natural killers to achieve their ends.

The Roman emperors used poison liberally to dispose of rivals, guests at Renaissance dinner parties were quietly assassinated with adulterated wine, and professional poisoners equipped murderous wives with toxic tonics for their husbands. In twentieth-century warfare, poisonous substances were used in new and awful ways to terrorize and obliterate both civilians and enemy forces.

Today, in the search for the perfect covert weapon, shadowy figures deploy pernicious poisons which are almost impossible to trace. They are only the latest in a long line of experimenters: for the same poisons used to kill or injure others have been used throughout history as intoxicants, aphrodisiacs and even elixirs of life. As every amateur toxicologist knows, the difference between a poison and medicine is often simply the dose.

Log in to get emails when Ben Hubbard has something new.