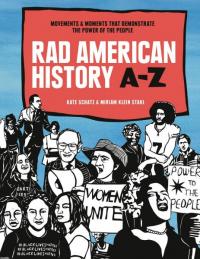 Rad American History A-Z: Movements and Moments That Demonstrate the Power of the People

In Rad American History A-Z, each letter of the alphabet tells the story of a significant moment in America’s progressive history, one that isn’t always covered in history classes: A is for Alcatraz, and the Native occupation of 1969; C is for the Combahee River Raid, a Civil War action planned in part by Union spy Harriet Tubman; Z is for Zuccotti Park, and the Occupy movement that briefly took over the world. Paired with dynamic paper-cut art by Miriam Klein Stahl, the entries by Kate Schatz explore several centuries of politics, culture, art, activism, and liberation, including radical librarians, Supreme Court cases, courageous youth, punk rocker grrrls, Southern quilts, and modern witches. In addition to the twenty-six core stories, short sidebars expand the discussion, and dictionary-style lists refer readers to additional key moments. So while F is for Federal Theater Project, a New Deal-era program that employed thousands of artists, F is also for Freedom Rides and First Amendment. E is for Earth First!, but also for Endangered Species Act and Equal Rights Amendment. There are tales of triumph, resilience, creation, and hope. Each engaging, fact-filled narrative illustrates an eye-opening moment that shows us how we got to now, and what we need to know about our histories to create a just and sustainable future.