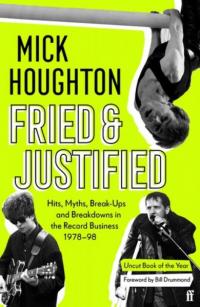 A candid frontline account of an illustrious gonzo career as an independent music publicist during the post-punk heyday of the 80s and 90s, featuring an introduction by Bill Drummond and new cover artwork by Jimmy Cauty.

We arrived in a fleet of white stretch limos at a clearing in a wood near Woking. Here the K Foundation was exhibiting a million pounds in cash, while Bill Drummond and Jimmy Cauty circled the perimeter in two orange Saracen armoured vehicles, blasting out Abba’s ‘Money Money Money’ . . .

Mick Houghton worked with some of the greatest, most influential and downright dysfunctional cult groups of the post-punk era and beyond ??" Ramones, Talking Heads, The Jesus and Mary Chain, The Undertones, Felt and Sonic Youth among them.

But the three acts Mick is most closely identified with are Echo & the Bunnymen, Julian Cope, and the KLF. As confidant and co-conspirator, he navigated the minefield of rivalries and contrasting fortunes which make Fried & Justified such a candid, amusing and insightful picture of an exciting and inspirational period for music.

Log in to get emails when Mick Houghton has something new.