Home / Store / Books / How to Resist Amazon and Why: The Fight for Local Economics, Data Privacy, Fair Labor, Independent Bookstores, and a People-Powered Future! 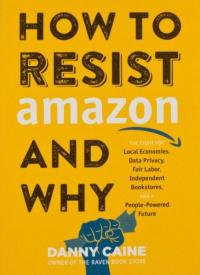 How to Resist Amazon and Why: The Fight for Local Economics, Data Privacy, Fair Labor, Independent Bookstores, and a People-Powered Future!

When a company's workers are literally dying on the job, when their business model relies on preying on local businesses and even their own vendors, when their CEO is literally the richest person in the world while their workers make low wages with impossible quotas... wouldn't you want to resist? Danny Caine, owner of Raven Book Store in Lawrence, Kansas has been an outspoken critic of the seemingly unstoppable Goliath of the bookselling world: Amazon. In this book, he lays out the case for shifting our personal money and civic investment away from global corporate behemoths and to small, local, independent businesses. Well-researched and lively, his tale covers the history of big box stores, the big political drama of delivery, and the perils of warehouse work. He shows how Amazon's ruthless discount strategies mean authors, publishers, and even Amazon themselves can lose money on every book sold. And he spells out a clear path to resistance, in a world where consumers are struggling to get by. In-depth research is interspersed with charming personal anecdotes from bookstore life, making this a readable, fascinating, essential book for the 2020s.

Log in to get emails when Danny Caine has something new.

Polaris: The Art of Meyoco