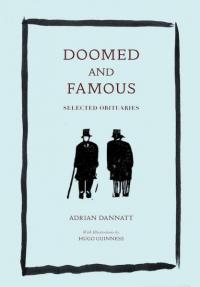 by Adrian Dannatt and Hugo Guinness

An obituarist opens his archive to celebrate the obscure and the eccentric.

In Doomed and Famous, an obituarist opens his archive in celebration of the most marginal and improbable characters, creating a meta-fiction of extinction and obscurity. For many decades Adrian Dannatt tracked and dredged the dead, with a macabre disregard for the etiquette of mortality. His specialty, much in demand among even the most mainstream publications, was to memorialize those whose eccentricity or criminality made them unlikely candidates for the fleeting immortality of a newspaper necrology. Dannatt maintained a veritable lust, perverse certainly, for capturing and celebrating such wayward existences. This book is a selection of some of the best-meaning most improbable, of these miniature biographies.